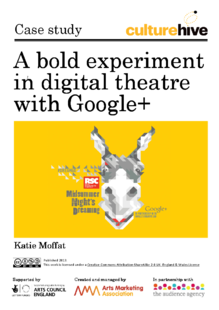 Using Google+ to run a bold experiment in digital theatre

The Royal Shakespeare Company (RSC) and Google Creative Lab considered the question: “what would a play look like on the internet?” The outcome was an ambitious idea to stage A Midsummer Night’s Dream in real-time over the course of three days in June 2013.  Characters in Midsummer Night's Dreaming (#dream40) also shared snippets - photos, text updates and videos - about the story on the RSC’s Google+ page as it played out, as would happen on social media about a real life event.

The team also knew they would be talking to two different audiences about the project; the existing RSC audience many of whom may well be new to G+ and the digital audience who may be familiar with the platform but less connected to the RSC and Shakespeare’s plays. For this reason the way the project was explained had to be carefully considered and executed. Videos such as the animated short trailer for example, presented the idea in an engaging and simple way. Sarah explained that in the preparation phase, work was done to connect with relevant online communities to make them aware of and get them engaged with, the project. This included groups interested in theatre or Shakespeare, together with general creative, arts and performance communities. “It was important that we didn’t just expect people to take part, we had to make sure that we actively went to find them and tell them about it”, Sarah said.