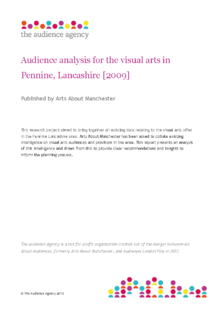 Audience analysis for the visual arts in Pennine Lancashire

This research project aimed to bring together all existing data relating to the Visual Arts offer in the Pennine Lancashire area. Collate the information available on existing audiences within the area and those who travel there to consume the visual arts offer. Identify audience development potential in terms of the types, volumes and propensities of key audience groups within the area and map the above to provide: clear recommendations on which audience groups offer greatest potential for development; and how these groups can be most effectively targeted in terms of the product offer, channels and message content.

From the map, it is clear that whilst the incidence of visitors from the north Ribble Valley is low, this is higher than we would expect given the density of the population in the area. Indeed penetration in the Ribble Valley is higher than we would expect in all areas apart from that around Read bordering Hyndburn and Burnley and the area neighbouring Craven, where population densities are minimal.

The area around Barnoldswick, Foulridge and Higherford, already identified as one with high density but lack of current local provision also shows very low penetration levels, suggesting that investment in the Higherford Mill might well help to engage new audiences. Other areas of low penetration include Rossendale, Darwen, much of Pendle and a middle core north of Burnley and Hyndburn, highlighted in green on the map below.