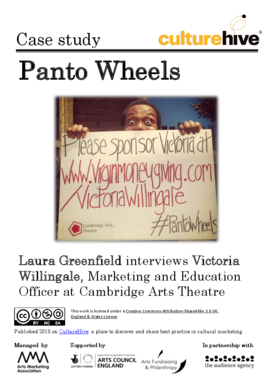 Panto Wheels: a sponsored fundraising event in the arts

Panto Wheels is a scheme run by Cambridge Arts Theatre to help children from culturally and socially deprived areas of Cambridgeshire to attend the theatre's Christmas pantomime by subsidising the cost of travel. In 2013 Victoria Willingale did a sponsored bike ride to raise awareness and money for Panto Wheels. By working with local partners, including the local paper, she was able to get press and social media attention, raise £1,600 (plus Gift Aid) in sponsorship, and create a relationship that led to a £3,800 grant for the scheme.

Victoria aimed to get sponsorship from her friends and family, the staff and trustees at Cambridge Arts Theatre, and existing supporters of the theatre and of local children’s charities.

She aimed to raise awareness among the general public via social media and news outlets: this allowed her to increase awareness among both potential supporters and potential beneficiaries (for example, local teachers and parents who could suggest the scheme to their school).