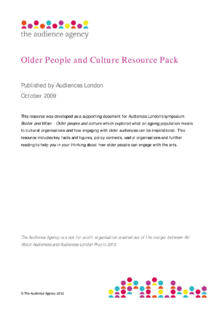 Cultural organisations are considering the impact that an ageing society will have on the sector. In this useful pack you'll find resources to help you be 'bolder and wiser' in your approaches with this audience. It includes facts and figures, cultural engagement information and a list of potential partner organisations who work with older people.

• There are now more pensioners than people under 16
• One in four babies born today will live to be a hundred
• One in three of us is now over 50
• The fastest growing age group is people over 80
• In just over 15 years, people over 50 will represent the majority of the population.
• As the older population grows, it becomes more diverse.

• Participation in many activities - including culture, sports, leisure and learning - declines with age, with those aged 75 or over having significantly lower rates of participation than all other age groups.

Impact of the 'demographic timebomb'