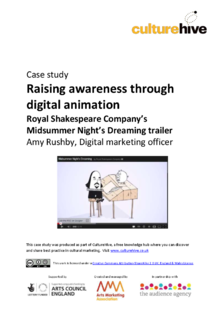 The Royal Shakespeare Company successfully used this "Billy Shakespeare" animation trailer to launch their new digital theatre project Midsummer Night's Dreaming in June 2013. The trailer was used in emails and blogs, and embedded into social media and news websites, including project partners Google+, which helped to promote this project to both new and existing audiences.

When it came to launching the digital project Midsummer Night’s Dreaming we wanted to produce a launch trailer that would capture the imaginations of our audiences, and appeal to those people who perhaps don’t have a lot of prior knowledge about Shakespeare or the RSC.

We already knew that the previous content created for us by The Brothers McLeod had proved popular with audiences, and by working with Google we knew that video content would be shared in a way our content hadn’t been shared before – we wanted something that would be “sticky”, that YouTube users as well as RSC audiences would want to share. Animation lent itself perfectly to the project, which is about digital experimentation and positioning the RSC differently as a digital innovator.