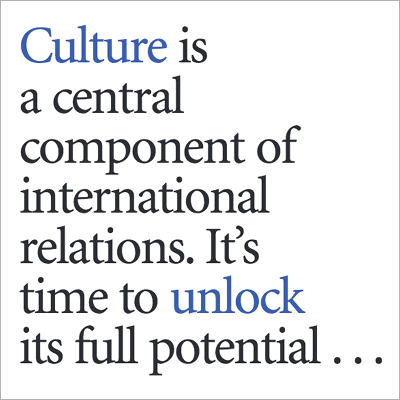 Role of culture in international diplomacy

Explore the role that culture has to play in international relations in this report, which features case studies and recommendations.

From the reciprocal gifts of ancient rulers to modern-day Expos, culture has been used as a way for leaders and countries to show who they are, assert their power and build lasting relationships. But in foreign policy, so often dominated by realpolitik thinking, culture and cultural exchange are often regarded as being desirable, but not essential. A common view is that, while cultural diplomacy can help establish and support working relationships between countries, it is strictly subordinate to the harder stuff of laws and treaties, bilateral negotiations, multilateral structures and military capability. While culture plays a role in diplomacy, there remains a stark contrast between the amount of attention, money and column inches devoted to this area, compared with more formal diplomacy.

Cultural Diplomacy argues that today, more than even before, culture has a vital role to play in international relations. This stems from the wider, connective and human values that culture has: culture is both the means by which we come to understand others, and an aspect of life with innate worth that we enjoy and seek out. Cultural exchange gives us the chance to appreciate points of commonality and, where there are differences, to understand the motivations and humanity that underlie them. As identity politics exert an increasing influence on domestic and international exchanges, these attributes make culture a critical forum for negotiation and a medium of exchange in finding shared solutions. Cultural contract provides a forum for unofficial political relationship-building: it keeps open negotiating channels with countries where political connections are in jeopardy, and helps to recalibrate relationships for changing times with emerging powers such as India and China. In the future alliances are just as likely to be forged along lines of cultural understanding as they are on economic or geographic ones.