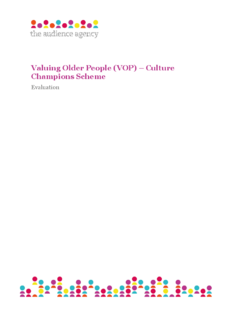 This report details the results from a project to increase engagement with the arts and culture among older people in Manchester. The scheme targeted 'gatekeepers' and turned them into ambassadors for culture at 15 venues around the city, including arts centres, theatres, museums and galleries. The resource introduces the Valuing Older People: Culture Champions scheme, and the context within which it was developed, and reviews the role of the Culture Champions and their networks. It also reviews the events organised as part of the scheme and the impact they had on the success of the scheme itself. It examines how suitable provision for older people was developed, and how personal development opportunities for the Culture Champions were created.

The main motivations for individuals to get involved with the Culture Champions scheme are: