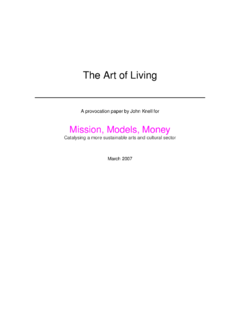 The Art of Living

In a follow-up to The Art of Dying, this article surveys the challenges and opportunities facing funding practice across the whole cultural sector. In a thorough and stimulating survey of arts and cultural organisations and all four funding communities, this is the first synthesis of all the funding issues the sector faces.

The majority of people we consulted are in favour of change and reform, yet they appear unwilling to devote energy, creativity, or political capital to this task.

This apparent paradox of inaction stems from a strong culture of accommodation to the current funding ecology across the sector - which has both hyper-rational and deeply emotional roots. Rational in the sense that many in the arts clearly believe that in a mass consumerist democracy, the current arts funding settlement from government is about as good as it gets, and further reform and tinkering will just further disrupt the quality of decision making and activity. They are committed to living well within the current system, rather than changing it.