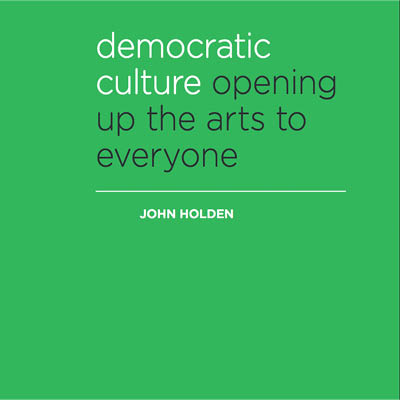 This paper identifies the false dichotomy between excellence and access and takes on the cultural snobs, for whom a democratic culture is a debased culture. John Holden challenges cultural professionals to acknowledge their responsibilities as educators and public servants.

"If art which is now sick is to live and not die, it must in the future be of the people, for the people, by the people; it must understand all and be understood by all"
William Morris (1)

In a recent Radio 3 programme, Is This a Record? (2), the classical music critic Norman Lebrecht was in discussion with the record producer Tom Shepherd. This is an excerpt from their conversation:

Lebrecht: The pressure to record public celebrities originated in the 1970s...

Shepherd: Norman, every one of us at some point or other, I think, is tempted to ride the coat-tails of a success that may not have been there for purely musical reasons. I signed up Eugene Fodor, who was a perfectly decent violinist... but I didn’t sign him up because he was good but because he was making headlines, because he was, like, playing the violin in a cowboy suit... Everybody in those times, in the mid 1970s, when everyone was trying to somehow democratise classical music, the person who wore the cowboy boots... was the person who you were going to go after because they were turning great art into what was considered popular taste, popular consumption, and I think we all fell victim to that. I mean... sometimes you do these things, which you do for purely mercenary reasons, and it pays off.

Lebrecht: The generic term for these compromises is ‘crossover’, and, as times got tough in the 1990s when the compact disc boom ended, it spread across the record labels like a black death.

Shepherd’s application of the term ‘democratise’ to the cynical use of gimmickry by a record company in pursuit of profit may seem surprising, but to bring the concept of ‘democracy’ into the cultural discourse raises interesting questions: what might ‘democratise’ mean in relation to culture? If democracy is desirable in the political system, why do some people consider it undesirable in the cultural world; why was democracy — the bedrock of American values — here used by the American Tom Shepherd in a pejorative sense?

This paper sets out to answer those questions. It asks what ‘cultural democracy’ might look like, if we had it, and begins by addressing what ‘culture’ means today.