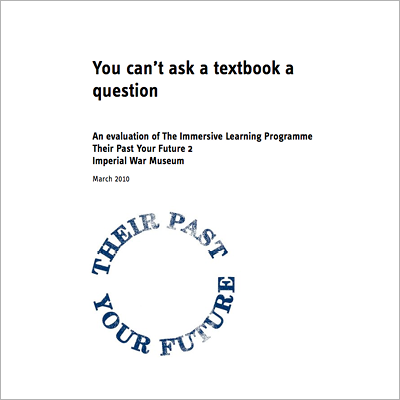 Evaluation of an education programme at Imperial War Museum

This evaluation report explores the impact of the Imperial War Museum's Immersive Learning Programme Their Past Your Future 2. The programme involved overseas trips for young people, which aimed to immerse them in the places, people and objects they were learning about.

Their Past Your Future (TPYF) was a major lottery-funded education programme that began in 2004. The first phase of the programme (2004-2006) was focused around the 60th anniversary of events leading up to the end of the Second World War in 2005 and particularly explored the themes of Remembrance and Commemoration, citizenship and history, and the impact of this conflict on people and places across the UK. TPYF1 was part of major commemorative programme, Veterans Reunited, which in total engaged with c11m people throughout the UK, including veterans, individuals and community groups. TPYF1 involved over half a million young people, of whom 544 went on immersive learning trips to 28 countries across the world.

Had an extended historical remit which aimed to explore 20th Century conflict as a whole, and themes related to it such as personal and national identity remembrance, commemoration, global impact of twentieth century conflict, citizenship, commonwealth, conflict resolution, reconstruction, reconciliation, asylum/refugees, peacekeeping and human rights.

Focused on immersive learning for both young people and educators, through engagement with Imperial War Museum collections and staff (and those of other cultural sites), overseas visits, visits to historical sites, peer-to-peer exchange, and interaction with veterans and eyewitnesses of conflict.

Aimed to investigate ways of embedding elements of the work undertaken by TPYF into the wider educational and interpretive work of the Imperial War Museum.