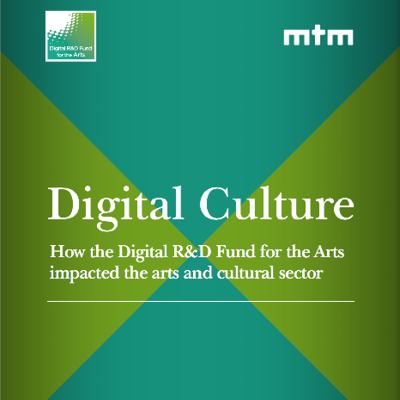 By Digital R&D Fund for the Arts

Explore how the Digital R&D Fund for the Arts impacted the arts and cultural sector.

The Digital R&D Fund for the Arts (2012-2015) was a programme run by Arts Council England, Nesta and the Arts and Humanities Research Council. Partnerships between arts and cultural organisations, technology companies and academic researchers were supported to test new uses of digital technology. In total, 52 R&D projects were funded over a three-year period. In parallel, a Digital Culture survey tracked the use of digital technology in the arts and cultural sector, and additional questions were included for the 52 Fund Participants (or FPs) to understand how their funded project affected their organisation. This report explores the impact that the Fund had on FPs and on the sector as a whole, using the Digital Culture dataset.

Start dates for the 52 projects varied, such that some of them completed surveys in all three years (2013, 2014, 2015) and some in only two (2014 and 2015). In the analysis of Fund Participants, we combined all the pre-project surveys (2013 for 17 and 2014 for 27) in order to compare with the post-project results from 2015, to look at how far Fund Participants (FPs) had 'travelled' compared with the wider sector. These results are indicative, though not proof, of causal impacts arising from the fund.

The survey findings suggest that FPs were much more active and sophisticated than the average organisation with regards to digital technology, and that this gap widened slightly over the three years. In nine out of 22 areas tested, the percentage of FPs undertaking the activity increased (although none of these changes were statistically significant). The biggest gaps, and those which increased the most, related to distribution and creation, for example: making existing recordings available digitally and creating standalone digital exhibits or works of art. Over the three-year period, the percentage of FPs placing importance on digital technology for distribution and creation increased from 70 per cent to 83 per cent, while the percentage of non-FPs decreased significantly from 61 per cent to 50 per cent. However, the opposite held true for business models, where the percentage of FPs seeing digital technology as important to their business model decreased from 77 per cent before their projects to 66 per cent after, while for other organisations the figure increased significantly from 33 per cent to 44 per cent.

With regards to the use of data, FPs were much more advanced than other organisations, but they saw slight declines over the three years, of the same magnitude as other organisations. The exception was in using data analysis and segmentation to understand audiences better, where FPs saw an increase in the percentage of organisations who reported doing this and non-FPs did not.

Download the report to read on:
Digital Culture (PDF) 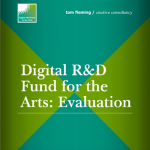