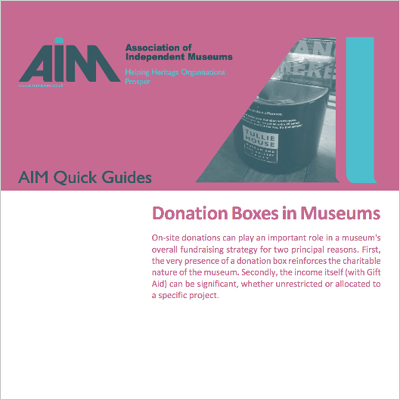 Judy Niner and Amy Richards from Development Partners share some dos and don'ts to understand if you want to get the best results from donation boxes.

On-site donations can play an important role in a museum's overall fundraising strategy for two principal reasons. First, the very presence of a donation box reinforces the charitable nature of the museum. Secondly, the income itself (with Gift Aid) can be significant, whether unrestricted or allocated to a specific project.

There are definitely some dos and don'ts to understand if you want to get the best results. Donation boxes are an investment - they may require outlay of around £700 each, but managed well, can return that investment over and over again.

This short paper, prepared for AIM by Development Partners (DP), reflects on the results of a survey of AIM members in summer 2014, along with other people's research and DP's experience of working with museums, large and small, across the UK. By giving practical advice on the use of donations boxes, we hope it will help you get the most out of this form of fundraising.

We'd like to thank the 90 respondents to the AIM survey and those who have agreed to be quoted within this paper.

Whether you are installing donation boxes for the first time or reviewing existing arrangements, the first consideration is the type and design of a donation box. Many respondents to our survey raised this issue, questioning whether a box tailored to the theme of the museum, such as a whisky barrel in a distillery museum, would result in greater donations than a clear, Perspex box, or whether child-friendly, interactive boxes are more successful.

The answer is clear: professionally presented, transparent, Perspex boxes on plinths are the best way to secure the greatest donation amounts.

This is for a number of reasons:

Donation boxes should be heavy enough to be secure, but possible to move. This enables you to change the location of the box if you have a temporary exhibition, or if you wish to experiment with the location to increase donations. Small, desk-top donation boxes generally look insecure and should be avoided. They will encourage small coin donations.

Sheffield Museums Trust (SMT) and London Transport Museum (LTM) provide good evidence to support these points. Over the past few years, both organisations have increased the number of boxes they have available on their premises. For SMT (a non-charging organisation) this has brought about a 2000% increase in donations received through boxes in a decade; LTM (which charges for entry) has quadrupled its donation amounts in a year. Both organisations use the same basic design for the majority of their boxes: simple Perspex cubes on plain plinths. The boxes are placed at the entrances and exits, and, at LTM, outside the cloakrooms.

In addition to these static boxes, both organisations personalise other boxes to support current campaigns or exhibitions. For example, at SMT, objects relevant to a particular appeal have been placed within a donation box to attract attention - a lucky knocking cat proved popular for a recent oriental exhibition.

LTM also updates the artwork on its boxes as its messages change. Dedicated donation boxes are used to encourage support for particular projects. For example, to encourage donations to its current campaign to restore a B-type bus, an appropriately presented box has been placed next to the bus to attract adults interested in the project. These project-based donation boxes can be especially useful in paid-for attractions as they may be more attractive to visitors than general donation requests.

Download the full guide to read on:
Donation boxes in museums (PDF) 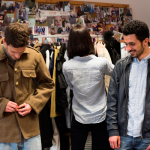 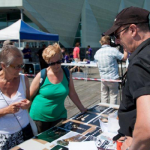 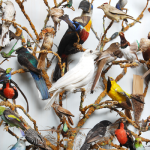