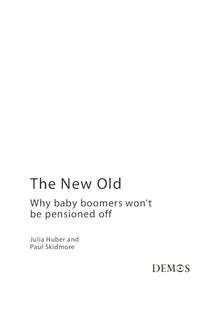 This report is an attempt to bring together what we know about the baby boomer population's attitudes and to map it against some of the key challenges that an ageing society presents. It argues that the principles of social equality, sustainability and quality should be placed at the heart of the political agenda. It offers a list of 11 challenges which could  help make society a better place to be old. It outlines the likely population picture in 2050 and argues that providing for old age is usually understood in terms of financial security,but this ignores the many other aspects of what people see as good lives.

Demographers and economists have run the numbers and they don’t look good. Over the next 50 years the age pyramid of the population will be turned upside down. The 2001 census revealed that people aged 60 and over already outnumber children under-16 in the UK for the first time.2 In 2040, there will be 5 million more people aged over 65 than there were at the turn of the millennium.

An older society could be a wiser and a smarter society.We are in the midst of several long-term transformations of the basis on which everyday life is organised. But rarely does a society get the chance to prepare itself so far in advance and refresh its wider social values in the process. The next two decades will show whether we are up to the
challenge.