You wrote a book, now what? 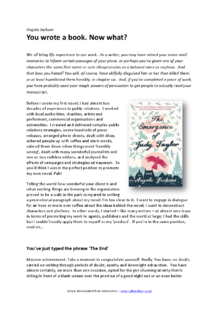 
Angela Jackson’s debut novel The Emergence of Judy Taylor has been received with great critical acclaim and is through to the final three of Amazon Rising Stars 2013.  In this article Angela reflects on how her background in arts PR helped her prepare to launch her own work, albeit there were many new lessons she had to learn along the way.  This is a fascinating read for those working in the literature world and indeed for anyone hoping to become a published author.

Before I wrote my first novel, I had almost two decades of experience in public relations. I worked with local authorities, charities, artists and performers, commercial organisations and universities. I created and delivered complex public relations strategies, wrote hundreds of press releases, arranged photo shoots, dealt with divas, sobered people up with coffee and stern words, calmed them down when things went Horribly Wrong, dealt with many wonderful journalists and one or two ruthless editors, and analysed the effects of campaigns and strategies ad nauseam. So you’d think I was in the perfect position to promote my own novel. Pah!