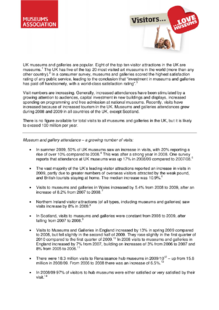 Research has shown that attendance at museum and galleries saw an increase of up to 17% in 2009. These figures and more are featured in this collection of research from sources including VisitEngland , The Economist, National Arts and Business Consumer Council, Northern Ireland Tourist Board, VisitWales and the Department for Culture, Media and Sport.

Museum and gallery attendance - more of the population are visiting: