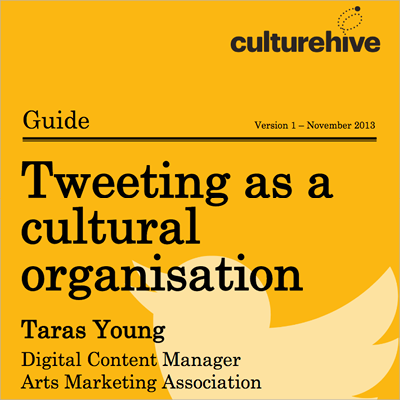 This comprehensive guide covers everything you need to know to get your organisation tweeting - from the basics, through to topics such as tone of voice and the best time to tweet. It also covers a range of tools for managing an institutional Twitter account, as well as scheduling tweets and more.

There are about 200m active Twitter users worldwide, 15m of whom are in the UK. Of these, 9m participate in discussion, while 6m are ‘lurkers’ – watching without participating. With a quarter of the population using Twitter, then, it’s not difficult to make the case for cultural organisations to have a presence. This guide will introduce you to the basics of Twitter, give guidance on day-to-day use, and finally provide some more advanced tips and tools.

Before diving into Twitter, it's useful to understand some of the basics. Twitter is a social network that lets you compose status updates, or 'tweets', which are limited to 140 characters. Web links use up 22 characters, regardless of how long they are (links to secure sites, starting with https://, use up 23 characters). If you attach an image to your tweet this will use 23 characters.

In the above example, @ExampleOrg (the sender) and @amadigital are usernames. Usernames always begin with an @ symbol and are not case-sensitive. When you mention someone else's username in a tweet they get alerted.

#twitter and #cats are hashtags. Adding a # symbol before a word turns the word into a link. This lets others browse related concepts, and can help new people find your tweet.

Twitter is based around the concept of timelines - chronological lists of tweets. You might also hear this referred to as a 'Twitter stream' or 'feed'. Your timeline shows all the tweets sent by people you follow. You can also view an individual user's timeline, which shows just the tweets they've sent. 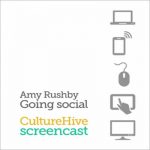 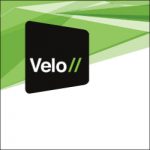 Instagram: how to build a following for the arts