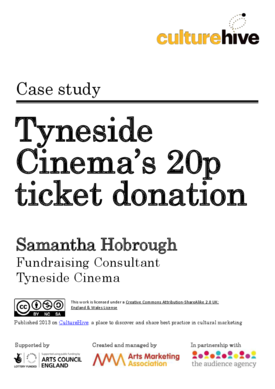 Using ticket donations as part of a wider appeal

The Tyneside Cinema is the North East of England’s full-time independent, first-run specialised cultural cinema and cross art form venue. As part of its fundraising activity to raise £1.3 million to expand the venue, Tyneside Cinema introduced a 20p ticket donation to each transaction over the period of this one year appeal.

It has been a very equal way of fundraising from our audience and will mean that each audience member feels that they have made a contribution to the appeal by the time the new spaces open.