Using digital giving tools as part of a fundraising campaign 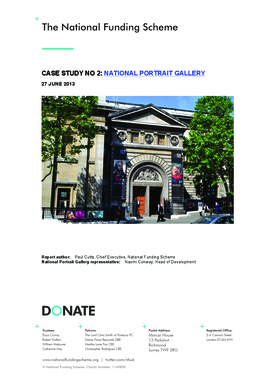 
Launched by the National Funding Scheme (NFS) in May 2013, DONATE is a dedicated mobile giving tool for the arts and heritage sector. This case study by NFS describes how the National Portrait Gallery used DONATE to help raise funds to restore a damaged painting by  Arthur Stockdale-Cope Naval Officers of World War I as part of the centenary commemorations and remembrances of the First World War.  It is a good example of how digital giving can be utilised during a conservation fundraising project.

Since 2012 the Gallery has started to focus more on lower-level individual giving – mostly because we were one of the successful ‘Catalyst’ grant winners, giving us the opportunity to raise £1m in individual giving until June 2016, mostly from individuals which will be matched pound for pound by DCMS and the Heritage Lottery Fund. In the past, with a small fundraising team, our focus has always had to be on soliciting a smaller number of high-level gifts. However a recent expansion of our individual giving team has meant that we can afford to look at lower
level giving in more detail, as a way to raise funds and widen our pool of potential bigger donors. DONATE fits well into this as it is a way to solicit lower-level funds from visitors and hopefully gain some more donor details.