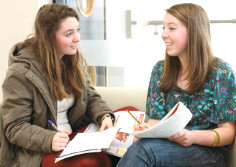 Part of the third phase of the Envisioning the library of the future research project, this report presents the results of two workshops held with young people in the 12-18 age bracket in November 2012. These were designed to take into account their views on the purpose and value of libraries as important current and future users of library services. The third phase of the programme explored public views of the purpose and value of public libraries.

Most of the participants had used libraries since they were small children, though some had come to libraries later and others had stopped using the library for a while and then returned. Some reasons why participants thought that young people may ‘turn away’ from libraries or not use them at all were: a) lack of time, because of study or part-time work commitments, and b) the ‘image problem’ that libraries can have with this age group.

Participants noted that some of their peers see reading – and therefore libraries – as being ‘uncool’ or ‘geeky’. One group thought that this image may come from American films, where young people who use the library are portrayed as ‘nerdy’.

Understanding what people value about libraries

Envisioning the library of the future