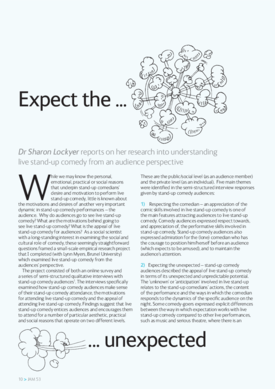 In 2011 Dr Sharon Lockyer and her colleague Lynn Myers at Brunel University, undertook research into understanding live stand-up comedy from an audience perspective. The project consisted of both an online survey and a series of semi-structured qualitative interviews with stand-up comedy audiences. In this article Dr Lockyer reports on the five main themes that were identified in the semi-structured interview responses. This article was first published in JAM (Journal of Arts Marketing) in January 2014.