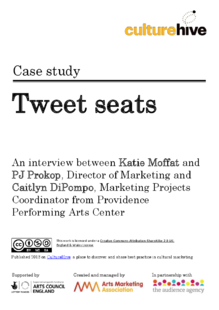 
Twitter is an important platform for Providence Performing Arts Center (PPAC) in Rhode Island, US, to raise awareness of new shows and events. This case study explains how PPAC designates special seats within the auditorium to individuals who tweet about a show whilst they are watching the performance. Tweet seats aims to help raise the profile of the venue and introduce PPAC to new audiences.

Process
We designate around 15 seats at the back of PPAC as our Tweet Seats. Individuals can apply for one free ticket to a show in return for tweeting about the performance. We have clear guidelines about what they should and shouldn’t do. For example, they’re required to dim the screens on their phones and asked not to reveal any major plot aspects, we also talk to them about not using inappropriate language.

We have a core team of PPAC Tweet Seaters that we recruited through social media. There wasn’t a formal process for this but once they’d applied, we looked at their individual profiles in order to get a sense of whether they seemed a good fit for the Arts Center, what kind of content they were tweeting, what sort of following they have and so on.

Ultimately it’s the producers of the individual shows who make the decision as to whether or not to allow tweet seats at their show but the vast majority of them are happy with it.