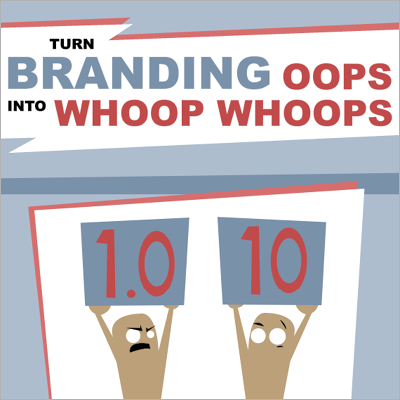 By National Arts Marketing Project (NAMP)
Americans for the Arts

From logo redesigns to product extension, this e-book explores six brands that have made a major OOPS, six other brands that get a ‘WHOOP WHOOP’ for their work well done, and how all of this can be applied to the arts.

'A brand is the set of expectations, memories, stories and relationships that, taken together, account for a consumer's decision to choose one [company] over another. If the consumer (whether it's a buyer or a donor) doesn't pay a premium, make a selection or spread the word, then no brand value exists for that consumer. A brand used to be something else. It used to be a logo or a design... Today, that's a shadow of the brand, something that might mark the brand's existence. But... if you've never heard of it, if you wouldn't choose it, if you don't recommend it, then there is no brand, at least not for you. Design is essential, but design is not brand.' Author Seth Godin

Named 'perhaps the worst TV branding mistake ever', the Sci Fi Channel's 2009 rebranding attempt to achieve a 'less geeky' image didn't go over so well among its viewers. The network officially changed the spelling to 'SyFy' after deciding that 'Sci-fi' was too 'niche' and believed the change could attract a wider audience - namely a larger portion of the 18-30 year old male demographic, if they were to get rid of the 'nerdy' association.

Yet the move encompassed more than just a change in the television network's name. Changes were made in programming, for instance the channel's decision to cancel shows such as fan favourite Stargate Atlantis (2004) and adding reality television to their line-up, such as Ultimate Gamer (2010), Ghost Hunters (2004) and Marcel's Quantum Kitchen (2011).

Avid viewers criticised the new name for its confusing pronunciation (calling it Si-ffy, Syffee, among other pronunciations) and pointed out that SyFy actually means 'sludge' and is a 'social disease' in Polish. The network's new tagline, 'Imagine Greater' was also criticised by fans that compared it to a rip-off of the old Apple 'Think Different'.

The takeaway from Syfy's branding oops

When making a major change to your brand, don't alienate your longtime fans. In the digital age, consumer reaction to enigmatic corporate branding decisions will be quick and brutal. Because the Science Fiction channel is the sole channel devoted to this genre, its audience expects a lot. When the formally known Sci Fi channel had already established an emotional tie with its viewers through its programming and scheduling, many fans felt as if the channel had forgotten its roots.

Relevance to the arts

Be strategic about your programming and be true to your audience. If your mission is to produce new American plays, don't add a Shakespeare favourite just because it might attract a new audience ONCE. Will that new audience stick around and come back for your regularly scheduled programming?