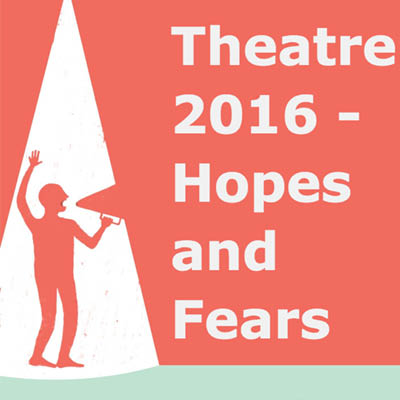 Discover the results of the Theatre 2016 ‘Hopes and Fears’ Survey in this report analysed by BON Culture.

This Hopes and Fears Survey was commissioned for the Theatre 2016 Conference by thirteen partner organisations and analysed by BON Culture. It is considered a snapshot of how respondents feel about what is happening in theatre in 2016, what theatre may be like in the future, and what they think the key issues may be. The Hopes and Fears findings were presented as a keynote speech by Dan Rebellato at the Theatre 2016 Conference.

The survey was publicised and people were invited to take part through the partner organisations and The Stage newspaper. Therefore the survey was self-selecting and cannot be considered to be wholly representative in a rigorous manner. There was also a very small percentage of respondents who identified as Asian or Asian British or Black or Black British.

Section One:
From your perspective, on a scale of 1 to 6, how would you describe the state of the UK Theatre industry today?

There was an overall correlation between the size and type of organisation respondents worked for, gender, geography and ethnicity. On average, respondents who identified as female, being from Northern regions, work for small scale organisations and creatives were less positive about British Theatre and in their outlook for the future.