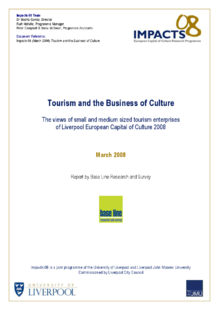 By: Base Line Research and Survey


This report showcases a selection of the findings of an Impacts 08 research project, which assessed the strength of the business sector in Liverpool, Merseyside and the North West during the European Capital of Culture year. It presents evidence from a small piece of qualitative research into the experiences of businesses in Merseyside’s visitor attraction and support sectors.

The specific objectives of this qualitative research project were:

A minority of the business interviewees argued that, although the Culture Company had made mistakes, these were more easily identified with hindsight than in advance. It was felt that the negative perception of the Culture Company was the result of a local and national media obsession with discovering bad news stories about Liverpool, and was encouraged by local politicians and other public figures more interested in advancing their own reputation than that of the city.