The impact of folk festivals 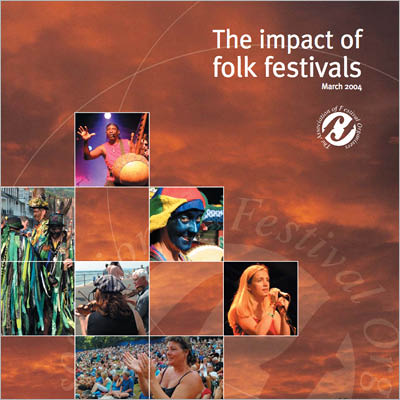 
This report looks at the impact of the folk festival and provides some key findings about festival goers, funding, programming, partnerships and ticketing.

The impact of folk festivals

This report details the three principal findings of a major study into folk festivals:

These findings are detailed on pages 5 to 12 and provide robust evidence that folk festivals are highly effective at meeting economic, social and artistic objectives and produce an excellent return on the public funding invested in them.

The needs of folk festivals

However, despite the success achieved by many festivals, others are inhibited from reaching their full potential by a combination of factors including inadequate and erratic funding, gaps in skills and knowledge and lack of support and advice.

Furthermore, even the successful festivals report that the folk sector is misrepresented by the media and misunderstood by the public, funders and policy makers. They believe the impact of folk festivals could be even greater if these issues were addressed. In the Festival Development section on pages 12 to 13, the report sets out these findings and makes recommendations to maximise the impact of folk festivals.

UK folk festivals generate spending of over £77 million each year.

There are now over 350 folk festivals in the UK. Between them they attract over 350,000 attendances from 106,000 people, each of whom attends an average 3.3 folk festivals per year. Each visitor spends, on average, £226 per festival.

The raw figures do not tell the whole story. The true economic impact of folk festivals is likely to be far greater than just the £77 million primary spend.

Festivals employ local people, they rely on goods and services supplied locally, and festival attenders spend most of their money locally in small enterprises. Because of this, the money stays and re-circulates within the local economy. Small enterprises employ local people and source their goods from other local suppliers. In turn, these local employees spend much of their earnings locally. This is known as the 'multiplier effect'.

Using a simple tool to gauge this economic multiplier, such as the New Economic Foundation's established LM3 measure, festivals and funders could easily and reliably calculate the true local impact.

The growth of the folk festival in cultural tourism

Assesing the impact of folk festivals

What are economic impact studies and how should you approach one?
You may also be interested in