The Orchestra Business Model – that’s no way to run a business! 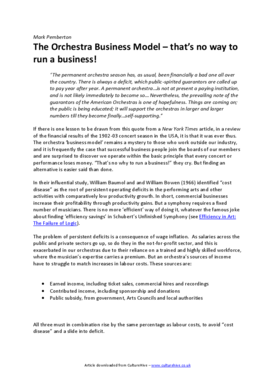 
A survey in 2013 by the Association of British Orchestras (ABO) of its members revealed a paradox that while audiences increased by 16% between 2009/10 and 2012/13, earned incomed declined by 11% in real terms. In this article, Mark Pemberton, Director of the ABO, considers whether there is a genuinely new “business model” that could be the salvation of the contemporary orchestra.

The orchestra ‘business model’ remains a mystery to those who work outside our industry, and it is frequently the case that successful business people join the boards of our members and are surprised to discover we operate within the basic principle that every concert or performance loses money. “That’s no why to run a business!” they cry. But finding an alternative is easier said than done.