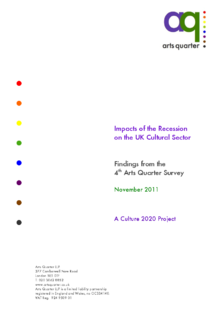 The impacts of the recession on the UK cultural sector

Explore the impacts that the global recession has had on the arts sector in the UK in this report on the results of the fourth survey that Arts Quarter has undertaken with arts organisations.

As before, we asked organizations to share with us performance data on a wide range of earned income sources in order to determine degrees of movement across all key revenue areas. This time around, a new trend is emerging. In our first three Surveys while we reported on declining levels of fundraising revenue, we were able to report on improving revenues from ticketing/ admissions and other visitor generated income sources. A new picture has started to emerge out of this year’s findings perhaps based around poor levels of consumer confidence and declining disposable incomes in the short term. In other areas of earned revenues, growth remains healthy while others possibly affected more by cuts in public sector funding have gone into decline. That certainty that earned revenues might be called on to take up the slack from any decline in fundraising revenues can no longer be assumed.

Among theatre respondents, greater numbers have reported growth on ticket revenues while among other art forms there is a noticeable decline in numbers of respondents reporting growth. A similar pattern is seen in on-site catering receipts but in on-site and online merchandising the trend is reversed with visitors looking to engage more with non-theatre art form offerings than with theatres.

In terms of commercial and private space hires, more non-theatre respondents are reporting growth this year than in earlier years and in greater numbers than theatre respondents – possible testament to a growing desire within the corporate sector to market and entertain to build their own commercial recovery.

Adapting to survive – designing for resilience