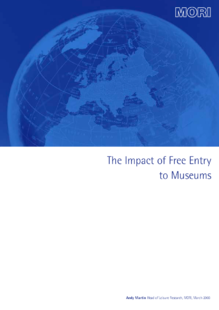 The impact of free entry to museums

Following a commitment by the Secretary of State for Culture in 2001, all  national museums and galleries who had been charging for admission returned to a free entry system. MORI had worked for many years with a number of national institutions, conducting surveys among visitors, potential visitors, friends, and other stakeholder audiences. This research report outlines their findings about the impact that introducing free entry had on these museums. It also considers whether it was many more people visiting museums and galleries - or just the same people visiting more frequently.

The Impact of Free Entry

We now know that visitor numbers have increased significantly, and that there has been an increase of 10 percentage points in the proportion of members of the public saying that they have visited a museum or gallery in the preceding 12 months. When we ask more directly about their behaviour, it seems that even more claim to have reacted to the reintroduction of free admission. A total of 7% say that 'I know that admission charges have been scrapped, and have been on a lot more museum and gallery visits this year than I did last year'. Another 8% say they have been on one or two more visits this year than last.