The impact on volunteers: Liverpool European Capital of Culture 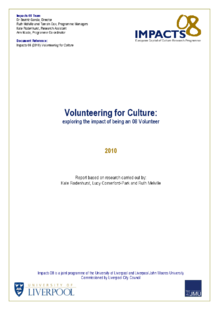 
Liverpool hosted the European Capital of Culture in 2008. This report seeks to explore the impact of being a Liverpool 08 volunteer, in particular the ways in which being involved affected their cultural interests and levels of participation in cultural activity. It explores whether volunteers’ personal aspirations have been met, and what changes they have experienced as a result of their participation.

The report also looks at the experience of 08 Volunteers throughout Liverpool‟s year as European Capital of Culture (ECoC). Specifically, it focuses on volunteers‟ own assessments of the highlights and successes of the Liverpool 08 programme, explores positive and negative factors which affected their experience of volunteering, and looks at the management of the 08 Volunteer programme from a volunteer perspective. The report highlights the success factors needed to create a positive volunteering experience in the context of major cultural events.

Twelve respondents specifically framed the success of the ECoC bid as an opportunity for the city to turn around negative perceptions of Liverpool. From both the focus group respondents and the surveys, it was clear that some volunteers felt personally affected by negative media portrayals of Liverpool.

Museum volunteering evaluation programme
You may also be interested in