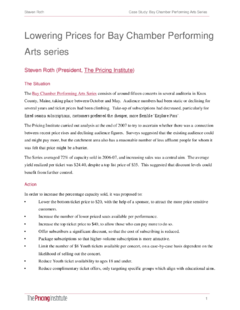 By The Pricing Institute

This case study sets out for arts marketers and box office managers the analysis done on existing and past ticket prices and purchaser patterns, and the changes made to increase the percentage capacity of tickets sold.

The Pricing Institute carried out analysis at the end of 2007 to try to ascertain whether there was a connection between recent price rises and declining audience figures. Surveys suggested that the existing audience could and might pay more, but the catchment area also has a reasonable number of less affluent people for whom it was felt that price might be a barrier.

The Series averaged 72% of capacity sold in 2006-07, and increasing sales was a central aim. The average yield realized per ticket was $24.40, despite a top list price of $35. This suggested that discount levels could benefit from further control.