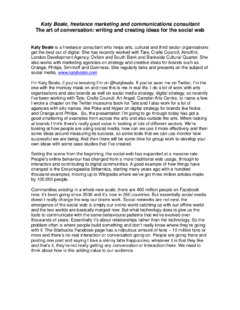 The art of conversation

Transcript of a presentation on copywriting and creating ideas for the social web.

The social web has expanded at a massive rate. People's online behaviour has changed from a more traditional web usage, through to interactive and contributing to digital communities. A good example of how things have changed is the Encyclopaedia Britannica, starting many years ago with a hundred thousand examples, moving up to Wikipedia where we’ve got three million articles made by 100,000 people.

Communities existing in a whole new scale, there are 400 million people on Facebook now, it’s been going since 2006 and it’s now in 260 countries. But essentially social media doesn’t really change the way our brains work.

Social networks are not new, the emergence of the social web is simply our online world catching up with our offline world and the two worlds are basically merged now. But what technology does is give us the tools to communicate with the same behavioural patterns that we've evolved over thousands of years. Essentially it's about relationships rather than the technology. So the problem often is where people build something and don’t really know where they’re going with it.

The Starbucks Facebook page has a ridiculous amount of fans – 10 million fans or more and there’s no real interaction or conversation going on. People are going there and posting one post and saying I love a skinny latte frappuccino, whatever it is that they like and that’s it, they’re not really getting any conversation or interaction there. We need to think about how is this adding value to our audience.