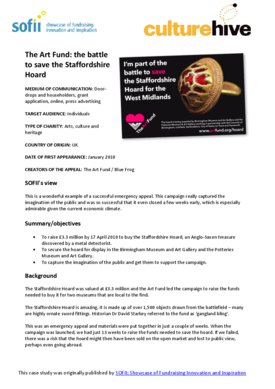 The Art Fund: the battle to save the Staffordshire Hoard

By SOFII: Showcase of Fundraising, Innovation and Inspiration

The Staffordshire Hoard was valued at £3.3 million and the Art Fund led the campaign to raise the funds needed to buy it for the Birmingham Museum and Art Gallery and the Potteries Museum and Art Gallery. This is a wonderful example of a successful emergency appeal. This campaign really captured the imagination of the public and was so successful that it even closed a few weeks early, which is especially admirable given the current economic climate. This case study was originally published by SOFII: Showcasing of Fundraising, Innovation and Inspirtation.

This is a great example of how to get an effective fundraising campaign up and running in a short amount of time. It enabled the public to play their part in saving a national treasure, which might otherwise have been lost. There’s plenty the Staffordshire Hoard can teach us not only about the Anglo-Saxon ‘dark ages’, but also about emergency fundraising.