Telephone fundraising in the arts 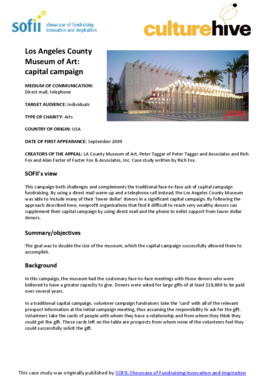 By: SOFII: Showcase of Fundraising, Innovation and Inspiration


In 2009 the Los Angeles County Museum used direct mail and telephone calls as part of its capital fundraising campaign. The museum was able to include many of their ‘lower dollar’ donors in a significant capital campaign. This case study was originally published by SOFII: Showcase of Fundraising Innovation and Inspiration.

Telephone fundraising in the arts May 1st, 2015Sara Lock

The results of this effort were outstanding. The phone portion of the campaign brought in pledges of over $1,500,000.