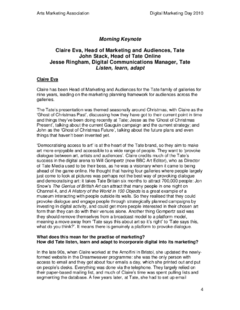 Tate listen, learn and adapt to find a new way for audiences to engage digitally

This keynote provides an insight  into how Tate have listened, learned and adapted to review and redirect its online and social activity and found new and improved ways of engaging with its audience, taking them from 14,000 fans/likes to 140,000 on Facebook; and from 16,000 to 200,000 followers on Twitter. The team give an outline of how they achieved greater engagement with audiences through usability research, by building marketing campaigns with strong social media elements and using email and social networks.

For past few years, there has been a strategy with goals; a plan with where they are and what they want to achieve; a code of engagement, dos and don’ts and user guidelines. The goals include listening, interacting, instigating conversations and debate, and the importance of getting across enthusiasm for Tate to the public.

Tate wanted to be more open and increase engagement, so social media really fitted the bill. They have recently exceeded targets – they’ve gone from 14,000 fans/likes to 140,000 this year on Facebook; and from 16,000 to 200,000 followers on Twitter. They are going to communicate to the public through many different voices, as many of the other departments are the ones with the best content – they’ve successfully trialled the curators and other departments having their own Twitter accounts.

Facebook they see as a collective voice of all the Tate departments and staff, as opposed to Twitter which has more one-to-one touch. There is a social media steering group, meeting weekly, discussing content for the fortnight, planning for exhibitions in advance: this includes the press team, the online and marketing teams, so it’s a collaborative effort. The steering group also looks after new employers, guiding new users, and the group’s members take it in turns on a daily basis to monitor the accounts. They aim to reach out to blogs and new online communities where art is being discussed, so press and marketing try to reach influential bloggers – it is key to seek these out.