Take your individual donors to the next level 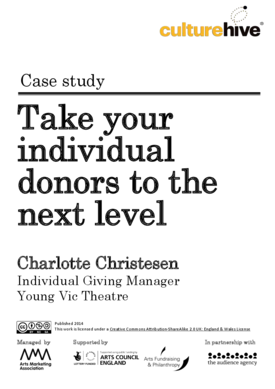 
The Young Vic opened in 1970 as a place in which younger directors, designers, actors, writers and technicians could work alongside the world’s great theatre artists. It has a highly diverse and engaged audience, enjoying work of the highest quality at low prices. This case study describes how the Young Vic’s Development department was able to build upon the positive reception to its successful programming over the past two years to engage and cultivate individual donors.

Take your individual donors to the next level August 6th, 2014Sara Lock

In the last two years, the Young Vic has doubled the number of its ‘Soul Mates’ and Individual Giving makes up an equal proportion of their funding to Corporate Giving. Subsequently, the Development department has also identified that the tiers of the ‘Soul Mates’ scheme are too widely spread, and that the jump between a donation of £1,500 to £5,000 is too great. If they are to successfully move people ‘up the ladder’ this needs to be more manageable.