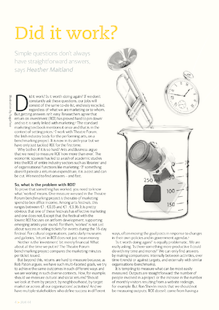 For cultural organisations, particularly museums and galleries, ‘return’ in ROI does not just mean money. Neither is the ‘investment’ bit merely financial. What about all the time we put in? There is an argument that we need to measure ROI now more than ever. The economic squeeze of the last few years has led to a rash of academic studies into the ROI of entire industry sectors such as libraries and of organisational functions like marketing. If something doesn’t provide a return on expenditure, it is a cost and can be cut.