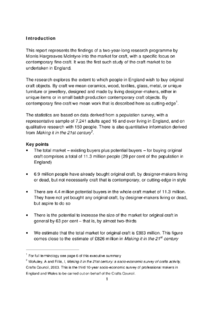 Studying the potential of the craft market

With a potential to increase the size of the market for original craft by 63 per cent this report provides an insight into the findings of a 2 year research programme looking at how work undertaken through the Crafts Council might be complemented, how the sales of contemporary fine craft can be increased and how the market for contemporary fine craft can be developed. It contains statistics based on data derived from a population survey of a sample of adults aged 16 and over, qualitative research and quantitative information derived from Making it in the 21st century - a socio-economic survey of crafts activity (Crafts Council, 2003).

7.3 million people would consider buying cutting-edge craft, though 4.4 million of these have not yet bought any craft, by designer-makers living or dead, but aspire to do so.

A significant 120,000 people have already bought contemporary craft made by a living designer-maker and would only or mostly buy cutting-edge contemporary fine craft.

This suggests that there is the potential to increase the size of market for craft in general by 63 per cent and to significantly increase the numbers of people buying cutting-edge or contemporary fine craft.

Understanding the contemporary craft market in a changing economy