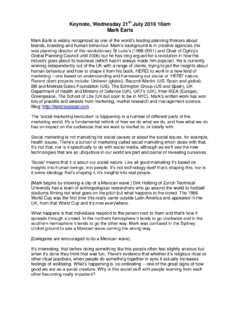 A summary of Mark Earl's keynote presentation at the AMA conference 2010 on the social marketing revolution.

There are things called mirror neurons that help us understand instinctively what other people are up to and feel what other people are feeling and help us learn from other people. Robin Dunbar who teaches at Oxford now has demonstrated theres a direct correlation between the sizes of primate brains, the neo cortex in particular relative to your body size, size of your brain and the size and complexity of groups in which you live.

In other words, our minds, that we think are about rational calculation and creativity are in fact evolved and adapted supremely, primarily for living with other people. It also turns out that this embedded social creature is rarely independent. Another Nobel Prize winner, Daniel Carnerman says human beings and independent decision making are like cats and swimming, they can do it if they really have to. Much of the stuff we imagine we think actually is shifted in time by our mind to make it seem as if its causal. Jeff Goldblum said in that great 80s reunion movie, The Big Chill , 'dont knock post rationalisation, dont knock it, post rationalisation is more important than sex'. When did you last go for a whole week without a really juicy post-rationalisation of your own behaviour? We do it all the time, we do it to ourselves, we do it to our partners, we do it to our colleagues, we do it to our therapists, we do it to our parents and we do it to market researchers. When asked what we do we make sense of it after the fact, mostly we just do stuff and then do it and most of its not independent. Because heres the big deal, the really big insight about human nature which changes how marketing has got to be: Not only are we embedded in social situations all of our lives, but much of what we learn we learn from other people, the big stuff and the small stuff. Its seen to be so important by social scientists now that some have suggested that we change the name of our species to Homo Mimmicus. In a scene from a 21-year old movie showing Meg Ryan and Billy Crystal in a deli in New York, Meg Ryans making all these strange noises and at the end, where Meg Ryans head finally hits the table and she stops whimpering, a woman at the next table leans over to the waiter having observed this experience and says: 'Ill have what shes having'. Louder. 'Ill have what shes having'. 'Ill have what shes having'. All our lives are about 'Ill have what shes having'. That creates a pull through populations, its how things spread. Its not only how