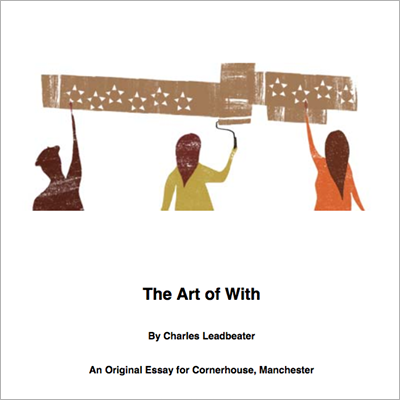 This article argues for a 'with' culture where people learn and create together rather than experience art as something that is 'done to them'. It discusses the internet as a tool for shared creativity and exchange and debates the potential for art that is constantly being changed by its online audience.

The world of to and for

The organisations and culture spawned by industrialisation, mass production and mass consumption in the 20th Century inescapably marked arts organisations, even as they stood apart from and often in opposition to it. Put simply, industrialisation created a world in which goods and services were delivered to and for people. For shorthand, call it the world of To and For.

Often in the name of doing things for people, traditional hierarchical organisations end up doing things to people. Companies say they work for consumers but often treat them like targets to be aimed at, wallets to be emptied, desires to be excited and manipulated. The person who calls himself my 'personal relationship manager' at a leading high street bank does not know me from Adam but, in the cause of trying to sell me some savings products I do not want, he pretends that we are lifelong friends. In the name of doing something for me, actually he wanted to do something to me: relieve me of some money. Many experiences of public services are often little different. Social services departments were created to help people in need. Yet those on the receiving end of services often complain they feel they are being done to, processed by a bureaucratic machine.

Politicians claim they are working for us, on our behalf, representing our views. But most of the time they seem to be spinning messages at us.

Our experience of things being done to us, in our best interests, starts early in life. All too often being at school, especially secondary schools, feels as if you are being done to: instruction is delivered to you, as you listen to your teacher or copy from the blackboard. Secondary education feels like something done to you too much of the time. Even in hospital when doctors attend to you, it can feel as if you are being done to by a system that processes you even as it is responding to your most urgent needs.

We live with systems that are meant to treat us like consumers or respond empathetically to our needs. All too often those very systems seem impersonal, rigid, inhuman even. Work in many large organisations often feels like an imposition. Too much of management in large organisations feels like it is making people do things they do not really want to do. 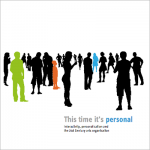