See It Live! An evaluation of Barclays Theatre Week 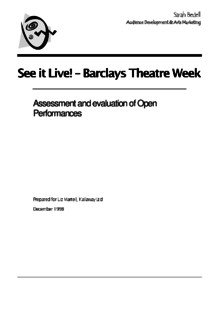 
See It Live! – Barclays Theatre Week, was a celebration of live theatre across the UK, aimed at raising awareness of the range and quality of work on offer and encouraging attendance amongst first timers.  This evaluation report discusses the experience of 18 theatres taking part in the programme, investigating how they found the process, what the outcomes were, and what the learning points for the future might be.

The theatre targeted first time attenders in low income areas, loosely defined by postcode, allocating 200 free tickets, supported by a free tour and talk about the theatre before the performance of Round and Round the Garden.  103 tickets were taken up by first timers (this was checked against box office ticketing data for verification), by 42 bookers.  14 of those bookers were from the identified postcode areas (33%).  A total of 68 people also chose the tour and talk beforehand, some 66% of the audience.

There were no significant changes to the original proposal, or shape of the project, although it was reported that they encountered suspicion of the free tickets, with one attender asking if she would be required to open an account with Barclays. This supports the theory that free tickets can sometimes devalue the performance on offer.