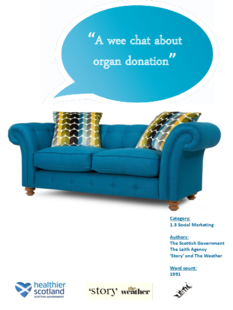 By: The Leith Agency, Scottish Government


This non-arts case study demonstrates how the Scottish Government and its partner agencies used a strategy of ‘positive social norming’ to get over half a million people talking about organ donation. This paper outlines the rationale behind the new strategic approach (to get people talking) and the activity that underpinned the campaign. In particular, this case study is a great example of effective field and digital marketing. People were encouraged to publicly celebrate support for organ donation via a virtual wall of supporter photos and messages. And it worked.