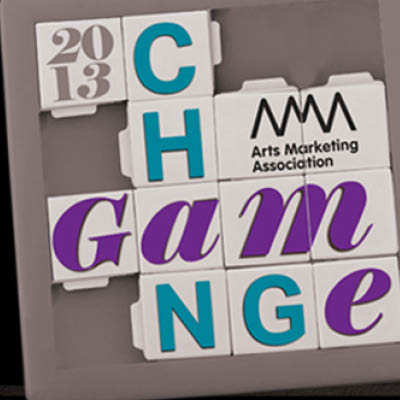 Andrew McIntyre explores how to review your organisation's vision and future direction to develop both art and audience. This is a transcript from Andrew's masterclass at AMA Conference 2013.

It has been interesting working with arts organisations over the last ten years or so. There’s been an explosion of consultancy and I’m deeply suspicious of consultancy which is odd as I am a consultant. What consultants have been doing with arts organisations is all kinds of ‘ings’. Things like ‘visioning’, ‘branding’ and an awful lot of ‘re-branding’, and then some ‘re-re-branding’. Strategising has been big and planning is ever present.

What I’m interested in, with all of that input, all of that strategic thinking is how successful that is for our organisations. I don’t think that there’s a huge amount of evidence to suggest that it has made that much of a difference to us. Partly because, often when we’re doing it, we’re doing it to meet somebody else’s agenda. We’re handed down the framework, have to fill in the boxes and address other people’s strategic objectives, and we’re rarely allowed to express ourselves. We’re rarely allowed to say what it is that we want to do either as artists or as institutions as we’ve always got one eye on what the funder is thinking.

I see an awful lot of these documents [Andrew handing out documents] because every time I work with an organisation I encounter a pile of previous documents and they all start to look the same. The worst offender in this is ‘the vision’. So, can I ask, can anyone in the room tell me what their ‘vision statement’ is? How many people know their vision statement and can recite it?

Delegate: Our vision is to be a building that is open all hours, to be a performance venue, meeting spaces, an opportunity to explore.

Delegate: To be the world’s leading centre for the study of history of art and conservation.

Andrew: Thank you. A lot of the time people don’t recognise their own vision statements. At a conference in New Zealand we took ten of the world’s leading arts organisations’ vision statements, removed their names, displayed them around the room and gave people the names to match to the statements. Out of 400 delegates the top score for that quiz was 2 out of 10. Most people didn’t get anywhere near and one of the things that people said was ‘that they all seem quite similar’. They’re all ‘world class’ and they’re all innovative, they’re all creative and they’re all ‘reaching everybody’.

This idea that we should create a vision statement of a sentence or two sentences or fifteen words is a bit like those competitions that you get on the back of cereal packets – can we sum up the organisation in fifteen words. I get the point of being clear but are we so time-poor that we can’t read more than one sentence or our brains are so small that we can’t keep more than one idea going at a time. Our organisations are so important to us, so complex and so nuanced that wouldn’t we be better writing a side of A4 paper? Wouldn’t we be better to really explain what it is that we would like to do? Wouldn’t we be better off actually making all of the arguments and explaining why we are different from the others, how we do it, who we do it for and what difference we are going to make? We started thinking that there’s got to be a better way and we need a way which involves more people and allows artistic leaders to fully express themselves rather than using hackneyed, clichéd arts speak and funder jargon that you’ve read everywhere else.

That was one of the things that we set out to do and we’re also thinking about branding – the frequency with which people are rebranding suggests that branding exercises are often not getting to the fundamental essence of the organisation. If you have to keep rebranding either your organisation is in an enormous state of change or the version that you’ve got is not fundamental and must be to some extent superficial. The brand should really be about your DNA, it shouldn’t be about some words that you put on a piece of paper forming your visual identity. It’s got to be about ‘who’ and ‘why’ you are.

When we looked at strategies and plans, two things that struck us were that everything is now a strategy. The word ‘strategy’ is now attached to everything. Action plans are now strategies, things that are just policies are now strategies. I don’t know if you find this in your organisation but organisations now have Strategy Soups. There are fifteen or so strategies and how they all relate to each other, nobody can explain. If you call your department’s thing a strategy, it’s more important than if you simply call it a plan.

We have a strategy for everything and the plans all start to look very ‘Local Authority’. You know the thing; front cover, really energising and warm words on page 3 that talk about the importance of whatever it is that you do, a few more bits and then you are into ‘grids’ – probably presented landscape with all the things that are going to happen, when they are going to happen by, who’s going to do the output, the targets and the timings etc. You look at page 17 of this plan where there are a lot of worthwhile, plausible and interesting things happening on page 17 and you think that’s ‘all good stuff’. It’s quite hard however to work out how it relates to the stuff on page 31, the stuff on page 9 or indeed, the words on page 3. It’s just that each department has generated a load of stuff and fitted it into the grid, the grids have been collated and stapled together and there’s our plan! It’s hard to work out where the brand is, and what it is that we are trying to achieve. I can see what we’re going to deliver, what the outputs are, but I can’t really see what the outcomes are. And I can’t see how the outcomes are coherent across the different departments. I can’t see how they’re going to deliver the vision of the organisation which is actually a 15-word tie-breaker with the words ‘world class’, ‘innovative’ and ‘creative’ in it.

If I want to understand your organisation I actually don’t want any of that stuff, I want you to explain your organisation. What we found was that people all know what their organisation is – not just the leaders but the other people that work there are also passionate. It seems however that the way that we are taught or the way that we’ve learnt to articulate what we do and who we are doesn’t seem that helpful, we’re constantly revisiting it. Even when there was a plan it didn’t galvanise the organisation into a single, coherent unit or delivering the big idea. It was just people getting on with their own thing and at some point, somebody would call them to account for what they’d put on page 17 and they’d say; ‘yes, we delivered that’.