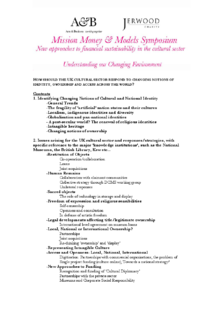 How should the UK cultural sector respond to changing notions of identity, ownership and access across the world? This document considers issues such as ownership of cultural items and restitution of objects in museum collections, access in the context of a culturally diverse society, and what it means to form partnerships outside the cultural sector - including corporate social responsibility (CSR).

The Museum of London is notable for its unilateral programme of the reburial of human remains in its collection. In November 2004 the museum was expected to bury 350 human remains in the City of London Cemetery atManor Park. The bones came from the burial ground of St Nicholas-by-the Shambles, Newgate Street and are disarticulated bones of “no scientific value.” The Museum’s Director holds strong views on this subject and has further plans for reburial. However, reburial or storage on a religious site would not take place before a scientific survey of the bones has been conducted. The museum recently established a Centre for Human BioArchaeology, which is being funded with a £435,000 grant from the Wellcome Trust. Details of all the bones will be recorded.