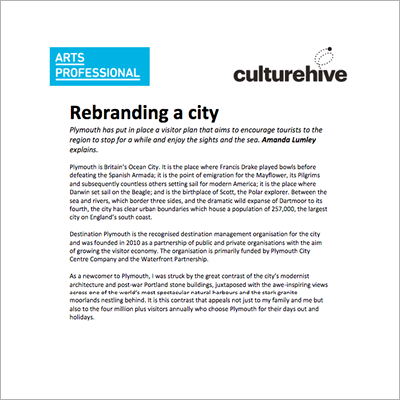 Discover how the visitor plan for Plymouth, which aimed to grow tourism visits by 20% and visitor spend by 25%, put culture and community engagement at its heart.

Plymouth is Britain's Ocean City. It is the place where Francis Drake played bowls before defeating the Spanish Armada. It is the point of emigration for the Mayflower, its Pilgrims and subsequently countless others setting sail for modern America. It is the place where Darwin set sail on the Beagle, and is the birthplace of Scott, the Polar explorer. Between the sea and rivers, which border three sides, and the dramatic wild expanse of Dartmoor to its fourth, the city has clear urban boundaries which house a population of 257,000, the largest city on England's south coast.

Destination Plymouth is the recognised destination management organisation for the city and was founded in 2010 as a partnership of public and private organisations with the aim of growing the visitor economy. The organisation is primarily funded by Plymouth City Centre Company and the Waterfront Partnership.

As a newcomer to Plymouth, I was struck by the great contrast of the city's modernist architecture and post-war Portland stone buildings, juxtaposed with the awe-inspiring views across one of the world's most spectacular natural harbours and the stark granite moorlands nestling behind. It is this contrast that appeals not just to my family and me but also to the four million plus visitors annually who choose Plymouth for their days out and holidays.

Plymouth as a city was bombed beyond recognition in the second world war, and after this dark period in its history the proud garrison town turned its back on Europe and the very ocean which had nurtured its beginnings as a major naval base and seaport. The community within Plymouth became insular and pockets of deprivation started to develop and become entrenched across several generations. The city lost its identity, its pride, its motivation to succeed and its connection with the sea. This loss of identity is reflected in Plymouth's status as a visitor destination. When mentioned to those who have not previously visited, there is usually reference to it being on the coast and linked with Sir Francis Drake but many have no concept of the hidden delights to be found here. Plymouth as such has underperformed for many years with the millions of visitors to Devon and Cornwall each year driving past at speed on the A38.

Plymouth currently has a relatively small volume of overnight stays, yet high room occupancy at a low per room yield. That means that in order to grow volumes of overnight visitors requires increasing and diversifying the hotel offer and attracting higher-spend markets as the city is heavily reliant on repeat and day visitors with a slightly below average spend. It is this very fact, coupled with the authentic nature and unique character of Plymouth, its heritage and history, that gives a sense of somewhere really special just waiting to be discovered. Starting from such a low base means we can only go up.

In 2011 we developed a visitor plan to help drive key actions that would support and grow tourism visits by 20% and visitor spend by 25% up to 2020. The visitor plan and vision puts culture at the heart of the strategy and recognises that engaging with the community and local businesses and reconnecting these to work in partnership for the greater good is a key requirement for success.