Reaching the hard to reach 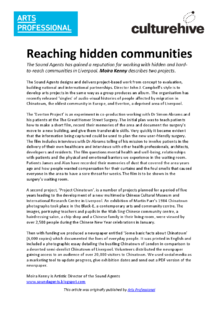 
The Sound Agents work with hidden and hard-to-reach communities in Liverpool. This article describes two projects; The first is a co-production working with patients documenting their surgery. The information captured was used to plan a new, friendlier surgery. The second ‘Project Chinatown’, involves a number of programmes leading to the development of a new multimedia Chinese Cultural Museum and International Research Centre in Liverpool.

The initial plan was to teach patients how to make a short film, record their memories of the area and document the surgery’s move to a new building, and give them transferable skills. Very quickly it became evident that the information being captured could be used to plan the new user-friendly surgery. The film includes interviews with Dr Abrams telling of his mission to involve patients in the delivery of their own healthcare and interviews with other health professionals, architects, developers and residents. The film questions mental health and well-being, relationships with patients and the physical and emotional barriers we experience in the waiting room.