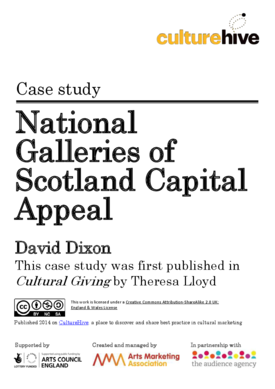 Raising funds through a capital appeal

In 2000 the National Galleries of Scotland (NGS) unveiled an ambitious project to refurbish the Royal Scottish Academy Building and to build an underground link adjacent to the National Gallery of Scotland. The project was partly funded by the Scottish Executive and Heritage Lottery Fund with the remaining funds raised through a capital appeal. This case study by David Dixon, was first published in 2006 in Theresa Lloyd's Cultural Giving, describes how the appeal raised a total of £14 million from individuals, trust and companies over a five year period.

Donor prospects
An initial prospect list of over 500 potential major and middle-sized donors was refined by desk research and discussion with contacts of the prospects, leaving a ‘hot’ major gift prospect list of 151 individuals. By the time the campaign concluded in 2005, 80 of these individuals had given, many at substantial levels. Geo-demographic data obtained from Experian was used in refining the prospect list but NGS did not use conventional wealth-screening as most of the relatively small number of prospects was known personally by the Campaign Council or NGS.