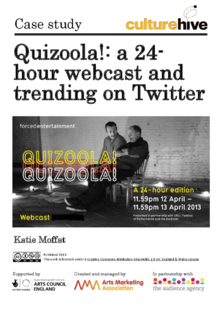 Forced Entertainment is a theatre company based in Sheffield, UK, who produces contemporary devised performances that tour worldwide. In April 2013, they performed one of their most popular pieces -  Quizoola! - continuously for 24 hours at the Barbican as part of the SPILL festival. The entire piece was streamed online via a live webcast and Twitter users were encouraged to comment on the performance and ask questions to the performers using the hashtag #Quizoola24. The performance was a huge success with many audience members remaining for the entire 24 hours.

The performers changed every two hours and those going on stage were handed sheets with newly-submitted questions as they went in for their shift.  Although most of these questions were either devised by the creative team prior to the performance or submitted by the public in advance via Twitter and the hashtag, webcast viewers who submitted during the broadcast also had the opportunity to have their own questions featured in the show.  This added an extra dimension to the piece since the audience was directly impacting on the piece they were watching.  Although people could also comment on the performance and submit questions via other social media channels e.g. The Forced Entertainment Facebook page, it was certainly Twitter that provided the majority of input and Sarah puts this down the real-time nature of the platform.