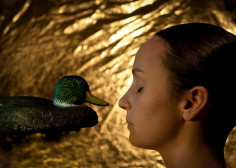 
The Questions & Dancers project offered emerging choreographers the chance to work with young people in the making of new work whilst engaging dance experience to young audiences. The project was created for eight to eleven year-old children and their families and presented by The Place, SadlerŌĆÖs Wells and Company of Angels. This case study describes the process of how the connection between the artists and children was maintained during the creative process, and how the young audiences were asked to share their thoughts on the final performances.┬Ā