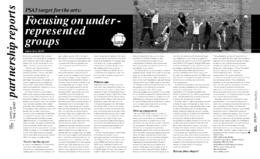 How the PSA3 target is used to measure under-represented groups

In this article Andrew Lewis outlines the PSA3 target set by the DCMS, used to measure under-represented groups. He looks at some of the statistical evidence which demonstrates which groups are the least represented in the arts - in terms of both attendance and participation, and reports on some of the known barriers which organisations need to address. He believes that success in increasing representation relies on work across the sector, including the partnerships built by - and between - the Arts Council, arts officers, voluntary and community art groups.

The participation agenda will continue to be important within the new Local Area Agreement framework.The Local Government White Paper focuses on how Local Authorities will have stronger and reinforced roles as community leaders and “place-shapers”.They will be better placed to respond to the needs of the communities they serve.

People who don’t currently attend arts events may have reservations as they do not know what to expect or what will be expected of them.The Borderline Theatre group devised a scheme called "Everything You Ever Wanted To Know About Theatre- Going But Were Afraid to Ask" which was designed to reduce the 'fear factor'.