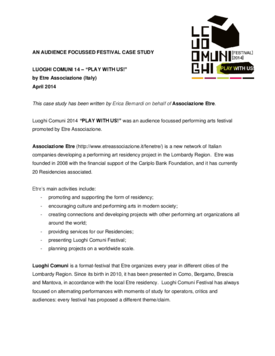 
Luoghi Comuni 2014 – “Play with us” was the sixth edition of a festival organised each year by Etre Associazione (a network of Italian performing arts companies).  The 2014 festival took place in Mantova.  Participating companies were given the remit of producing (or adapting) theatre that would bring performers closer to their audience to create intense experiences.  Productions were performed in unconventional spaces (eg coffee shops, dressing rooms) in a town that was not accustomed to presenting such theatrical experiences – as such WOM was particularly powerful producing some challenges for the festival team. This case study was written by audience development intern Erica Bernardi (supervised by Etre Director, Fabio Ferretti).  More information is available at http://www.luoghicomunifestival.com/2014-FocusOn/.